Just because there isn’t a ski resort in Philadelphia doesn’t mean there’s nowhere to ski when the white stuff falls. With a foot of snow, it becomes possible to ski one of the city’s most iconic landmarks: yes, skiing the Art Museum steps! 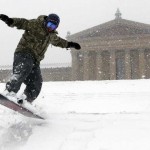 Situated at one end of the Ben Franklin Parkway (with skater-loving LOVE Park at the other) and housing a world-class collection of art, the Philadelphia Museum of Art would be a city icon even if it wasn’t for the Rocky movies. For many, the Art Museum steps are best known as the finishing line for Rocky Balboa’s workout in Rocky I (with glimpses in other Rocky movies). When it snows, the direction to head is DOWN!

Skiing the Art Museum takes some balls and control. It’s hard to turn on the bumpy steps or the plateaus, but with some heavy PA snow, it’s a challenge many are willing to take. As it’s on a hill, there are also some lines off the back and side of the museum.

Check out some videos of folk skiing the Art Museum steps.