As the oldest commercial ski resort in Pennsylvania, Big Boulder Ski Area as a rich and storied history.

The roots of Big Boulder PA date back to the 1700s and the founding of Lehigh Coal and Navigation by Josiah White and Erskine Hazzard, who pioneered anthracite coal mining and played a significant role in the Industrial Revolution in Pennsylvania. These entrepreneurs created the world’s first iron wire suspension bridge and an effective navigation system of hydrostatic locks to transport large amounts of coal to Philadelphia. To increase their efficiency and bring more coal from their mines to the navigation system the company constructed America’s second railroad in 1827-28. The Morris and Delaware Canals, completed in 1832-1833, had the largest carrying capacity of any canal in the United States, stretching to Mauch Chunk to Easton, into New York and Philadelphia. By 1840, Lehigh Coal and Navigation Company employed over 1,000 people in a dozen or more manufacturing establishments. At its peak capacity in 1919 the company had 11,000 employees and was producing 5 million tons of coal every year.

Around 1942, during World War II, as the coal industry shifted from underground to surface mining, employees of Lehigh Coal built Split Rock Ski Area on the shores of Lake Harmony as a company retreat. The Split Rock Ski Club consisted of Split Rock Lodge and the adjoining Hazzard ski slope (named after Erskine Hazzard). Situated between the present-day resorts Big Boulder and Jack Frost, Split Rock Ski Area continued to run until the 1990s, and the refurbished lodge is still open. When the lodge sold in 1949, Hazzard ski slope became known as Big Boulder Ski Area. This was the first commercial ski resort in Pennsylvania, and it was here that snowmaking was first used successfully in a commercial application. 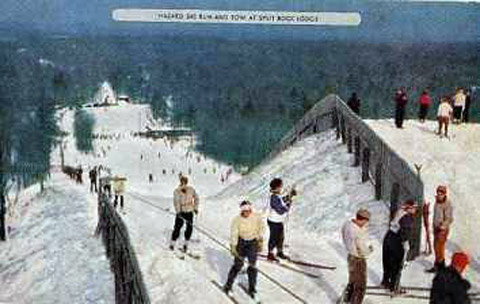 The history of Big Boulder Ski Area is also the history of snowmaking. The idea for snowmaking came from an article reported on December 22, 1950, describing the story of the Tropeano brothers from Lexington, Massachusetts who made snow using an experimental portable irrigation system. Another report dated December 14, 1950, states that Wayne Pierce of Milford Connecticut filed the first patent application for the making of snow by blowing water through a nozzle. These two events lead to investigation of snowmaking at Big Boulder Mountain in Pennsylvania. 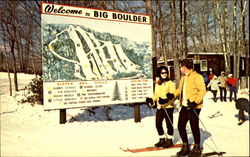 It was a Big Boulder PA employee, John Guresh,  who was instrumental in building Big Boulder Ski Area was the pioneer who perfected the snowmaking machine. Big Boulder purchased a prototype system from the Larchmont Engineering Company, but this proved ineffective. Attempts to incorporate an irrigation nozzle also proved unworkable. Guresh did not give up and in 1956-1957 a machine that resembled a lawn sprinkler was used to emit crystals that looked and acted like snow. Guresh said of his first efforts, “One of the biggest problems, was keeping the water moving fast enough to prevent freezing before it could be sprayed in microscopic beads in the atmosphere.”

The ability to make snow proved crucial for the operation of a winter-long ski resort in Pennsylvania, but Guresh never benefited much financially from his inventions. Still “It never bothered me that I didn’t become rich and famous from the invention,” he said. “I made a lot of friends and got a lot of recognition, that was more important.”

Spurred by the success of Big Boulder, the operators opened Jack Frost Ski Mountain in 1972. Their experiences at Big Boulder lay the groundwork for a well thought out ski resort. All of the slopes, lifts, buildings, and snowmaking that would be required were planned as part of the original construction. Today, Jack Frost Ski Area remains a companion resort to Big Boulder Ski Area. Tickets for one are good for the other.

The rise of snowboarding in the 1980s posed a quandary for many ski resorts. Some seized the increased interest in winter sports and welcomed boarders onto the slopes. Others went as far as banning the new riders. Big Boulder PA was quick to try to appeal to the new sport. Today, the mountain dedicates almost half its sloped to park terrain. Ironically, with the increased popularity of freestyle skiing, these parks now appeal to new generations of skiers as well as snowboarders. 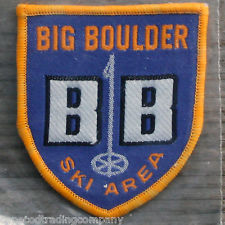 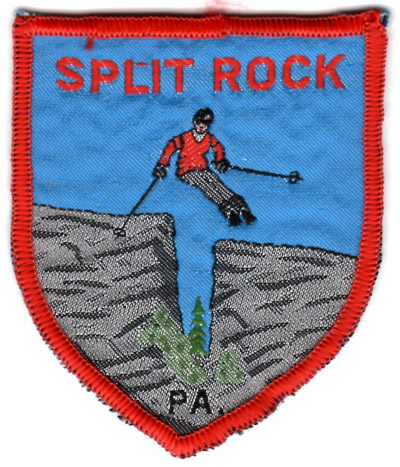