With 1,072 vertical drop from a 3,120-foot summit elevation, Blue Knob Ski Resort is the HIGH ski resort in Pennsylvania (even if that is small by the standards of other ski states). Only Blue Mountain Ski Resort has a higher vert, and there is almost no mountain in the state that has a higher total elevations because Blue Knob Mountain, on which the ski resort is situated, is the second tallest mountain in Pennsylvania.

The hard-working ski patrol at other ski resorts in PA sometimes work a little too hard to ensure skiers don’t stray off-piste into the trees. By contrast, glade skiing is encouraged (weather permitting) at Blue Knob Ski Resort. Although it boasts the states second highest vert, the best terrain takes up only the lower two thirds of the elevation drop, accessible from the East Wall Traverse off the two double lifts from the lower base (take the one on skiers right to get off midway or the one skiers left for some higher intermediate terrain.) There’s a small “bowl” at the end of the traverse, from which you can also drop into glade runs, chutes, and the moguled Extrovert runs. Or take the groomed black Steamboat trail. You can also go the other way from the traverse and use the often bumped-up Deer Run (blue) to drop into the steeps of Lower Shortway (double black). This really is some expert terrain unusual for ski resorts in PA.

Intermediates and beginners should head up to the top. Blue-rated Jack Rabbit to green-rated Run Out along the skiers left of Blue Knob ski terrain makes for a long warm-up run. The all-green route would be Upper Mambo to Lower Mambo to Run Out. A short triple-chair from the top services more gentle beginners terrain. The terrain park at the center of the hill provides some freestyle opportunities.

Unlike many ski resorts in PA, Blue Knob also has access to some skiable backcountry terrain. This is not patrolled or maintained, but there are runs accessible from lifts, which go to lifts. Be prepared to hike. If you can’t find a local to give up the down low, look out for tracks coming out the trees or going in and try to figure out where they come from. The trees may look dense at first but open up after a turn or two. And they may not. Ski backcountry at your own risk (and for your own rewards). 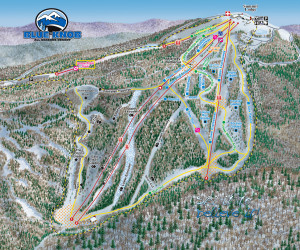 Blue Knob Ski Resort also boasts a small tubing area and a network of groomed crosscountry skiing trails. It’s location in the middle of the state make it a great choice from York, Harrisburg, or Lancaster, and it also sees many skiers from the Washington DC area.

History of Blue Knob Ski Area
One of the tallest places in Pennsylvania, Blue Knob Mountain was the site of the Claysburg Air Force Radar Station until it was deactivated in 1961. The next year, Blue Knob Ski Area was developed using some of the terrain cleared by the military. (You can still see signs from the radar station at the summit, and one of the ski lodge buildings was originally part of the outpost). The most recent upgrades took place in 2011 with a revamped lodge and new snowmaking equipment.

Parking for Blue Knob Ski Area is at the top of the hill, so you have to end your day with a chair lift, not a run.